As I stated this journey started with a quick clean up but ended up a nearly full rebuild.
The rebuild included wire wheel the rust, Rust-Oleum Rusty Metal Primer and some Rust-Oleum Gray Enamel. Also replacing the wiring with some 14ga SO cable and new strain reliefs, a new safety power switch (in place of the dangerous double rocker switches, motor / light, which is which?) and added a LED ring light which I am still trying to work out the mounting. And after the table was painted I discovered that the t-slots had casting issues and would not allow the dogs to move in them smoothly. I had to grind off the snags and I still haven't gotten around to repainting it. That ship may have sailed.

After it was all back together I determined the bearings didn't sound good at the max speed (4200 RPM) so back apart to install some new bearings. But before I did that, I researched comments I had read earlier about how a drill press did not have the right bearings for milling. I looked into installing some angular contact bearing since those seemed to be better for milling applications. But after reading bearing manuals I determined that my bearings are fine. There is an deep groove bearing at the bottom followed by a full thrust bearing and finally another deep groove bearing at the top. People claimed that the deep groove bearings are not good for radial loads which I believe is not correct. They are in fact designed for radial loads (they are used on axles after all) and handle some radial load but since I have a full on thrust bearing that is not an issue. So I'm confident my bearings will not be a problem, I guess we'll see. 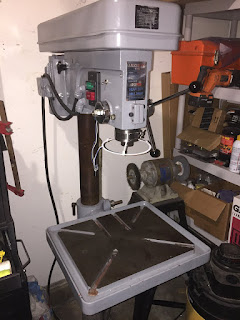