I bought an older (1980s) Taiwanese Drill press off Craigslist. It's a 20" with a 1HP motor and 3/4" chuck with a production table. Since this was a pretty beefy machine I got the idea to see if I could do some milling on it. So I went from "I'll just clean it up a little" to a full blown milling machine conversion project. My motivation is lack of money for a real milling machine, several thousands of dollars, a simple lack of room and of course I like making things. I have spent many hours reading posts about people saying how these kind of conversions are a waste of time but those people usually have a Bridgeport. Hopefully I can make enough improvements to allow decent milling of aluminum and maybe a little soft steel. If I fail at least my path will be well documented for all to see and learn from and I'll have some fun. 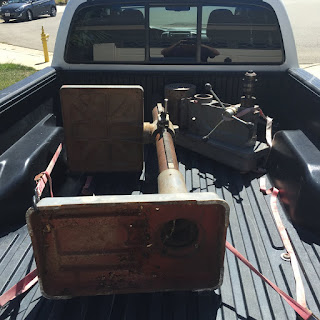 I have never used a milling machine before and perhaps my ignorance has embolden me. I'm avoiding any modifications that would render the drill press less useful and therefore really don't have much to lose except time and some money. I paid $350 for the press and I figure will spend about that on these upgrades, excluding tooling.